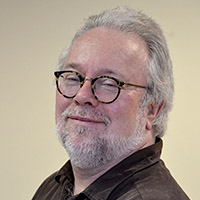 David Wojahn, Professor of English and Director of the Creative Writing Program, VCU

David Wojahn is a distinguished poet, essayist, and Professor of English at VCU. He is currently the Director of VCU’s Creative Writing Program, which is unique in the College of Humanities and Sciences, in that it awards this division’s only degree in fine arts, an MFA in Creative Writing. In recent years, the VCU Creative Writing Program has also been home to three Guggenheim Fellows, including David Wojahn. When I was offered the opportunity to teach poetry here, one of the most compelling factors in my decision was the prospect of working with David, whose reputation as a poet’s poet and a highly effective and dedicated teacher has earned him many other national awards, including a fellowship from the National Endowment for the Arts, the William Carlos Williams Award, The Carole Weinstein Poetry Prize, the Poet’s Prize, and O.B. Hardison Award from the Folger Shakespeare Library.

Indeed, if one were looking for a model of humility, sharp wit, warm humor, kindness, generosity, and measured grace, accompanied by remarkably high creative achievement, one would be hard pressed to find a more exemplary colleague, human being, and educator. This year, five graduate students will complete their studies in poetry in VCU’s MFA program, and, as is usually the case, David will have been the primary advisor or second reader on almost all of their culminating theses. David was the 2008 winner of VCU’s Outstanding Faculty Award, and many of David’s students have gone on to illustrious careers of their own. By his own estimation, he has been teaching literature and creative writing for 45 years.
David Wojahn’s first collection of poetry, Icehouse Lights (1981), was chosen by the renowned poet Richard Hugo for the Yale Younger Poets Award, arguably the most prestigious and most competitive avenue by which an emerging American poet might enter the contemporary literary landscape. When I previewed a relatively new textbook (2015) from Oxford University Press designed for creative writing classrooms, I was delighted to see a section entitled “Two Case Studies: Hemingway and Wojahn,” which carefully analyzes a poem from this collection. In his original citation, Hugo writes: "David Wojahn's poems concern themselves with emotive basics: leaving home, watching those we love age and die, the inescapable drone of our mortality,” pointing from the start to the richly elegiac quality that has continued to mark David’s work. During a recent conversation, he cited Allen Grossman’s assertion that the function of poetry is to “preserve the memory of the person.” I thought of another Grossman claim from the same text (Summa Lyrica): the kind of success which poetry facilitates is called “immortality.”

Hence, when asked about what might be called “the fundamentally elegiac impulse” in his work, David said that, while his poems are very often “laced with elegy,” his aim is something more like an “homage,” an effort at expressing “gratitude.” “When I read a good poem,” he said, “I am filled with gratitude.” He sees his own poems, especially those directly dedicated to other poets and artists—such as one of his new poems “Threnody” recently published in Plume (link provided below), which is dedicated to the poet Jean Valentine (1934-2015)—as a way to honor the gifts he feels he has been given by them. His collection World Tree (2011), winner of the Lenore Marshall Poetry Prize from the Academy of American Poets, includes poems in conversation with the poets Nâzim Hikmet, Arthur Rimbaud, Tomas Tranströmer, Czesław Miłosz, and Frank O’Hara, as well other poems foregrounding musicians, including Willy DeVille, Jimmie Rodgers, Warren Zevon and Johnny Cash. In fact, his 1990 collection Mystery Train, with its iconic image of Bob Dylan on the cover, can be seen as an homage to that other more popular branch of the American bardic tradition, rock and roll.

Yet many of David’s poems are driven not by public homage and loss but by deeply personal mourning. Two poems that come immediately to mind are “Elegy: Robot Folding Laundry” and “For the Scribe Gar.Una of Uruk 3,000 B.C.” from his most recent collection, For the Scribe (2017). One of these poems juxtaposes his emerging adult understanding of the narrowness of his mother’s life and her profound loneliness as a housewife in post-war Minnesota with a precise description of the terribly awkward and largely ineffective mechanical movements of an actual robot programmed to fold laundry. In the other, his meditation on the first handwritten signature is precipitated by having opened a book containing the extensive marginalia of his late wife, the poet Lynda Hull.

While David Wojahn is the author of nine collections of poetry, he has also published two collections of essays on poetry and poetic craft and has just completed a third. He says that when he finds it hard to write poems—as it has been for many poets in recent years—he turns to writing essays, which he enjoys doing, and now writes simply for fun. He says that he appreciates the way that this form both enables and challenges him to weave the personal and the scholarly together in a voice that he hopes will not strike a reader as pedantic.

This desire to integrate the lived emotional life into the life of the mind and to bring the experiences of the individual into larger cultural contexts is central to David’s work. The poet Linda Gregerson, one of the Judges for the Lenore Marshall Prize, describes the poems in World Tree (2011) as “exquisitely cadenced, politically astute, large of heart, and keen of mind.” “These are,” she adds, “poems of extraordinary moral penetration.” And in her praise for For the Scribe (2017), the poet Linda Bierds writes: “The juxtapositions in this extraordinary book are, in the end, both separate and united. They quiver together like filings on a magnet: This is our fractured world.”

David told me that the first poetry reading he ever attended was in 1972. The poet was Tomas Transtörmer, who would be awarded the Nobel Prize in 2011. What David says he recalls most vividly (and perhaps what spurred him on to a life filled with poetry) was a pointed exchange during the Q & A afterwards. Someone from the audience took the poet to task for having written poems about the dailiness of life—about driving a car, for instance—when there were so many large and terrible things happening with the world. Tranströmer, for his part, responded by saying that he felt all of his poems were ultimately political because they insisted on the primacy of the private life. David added that very few days go by when he does not think about that claim.

Asked about how the world of poetry might have changed since then, he said that he is struck by the pervasiveness of social media. While he is delighted that it has been able to bring both so many more voices and a wider audience to poetry than might ever have been possible otherwise, he worries that the atmosphere of “necessary quiet receptiveness” that so many poems demand is harder to locate or conjure. “A good poem can make one feel as though there are only two people in the world,” he said. “The poet and the reader.”

Here then is the opening of his very recent poem “Threnody”:

The train coach, Jean—empty except for you,

the jittery aisle toward your seat

you look up from

the notebook you’ve been writing in