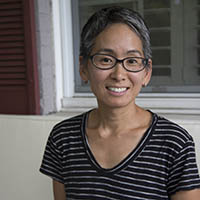 I am so pleased to shine a spotlight on the remarkable work of Dr. Christine Cynn, Associate Professor of Gender, Sexuality and Women’s Studies. Dr. Cynn is a truly interdisciplinary scholar and teacher, bringing together feminist, queer, postcolonial and critical race theories with cultural studies methodology to examine a host of contemporary cultural products, especially those that narrate and mediate the racialized, gendered, and classed experience of disease, risk, value, perversion, and illness. Dr. Cynn’s work asks us to think critically about the discourses of disease and risk that make different bodies differently valuable and the systemic processes expose some bodies to early death.

Dr. Cynn’s first book, Prevention: Gender, Sexuality, AIDS, and the Media in Côte d’Ivoire, was released by the Ohio State University Press in 2018, as part of the Press’ Abnormativities: Queer/Gender/Embodiment series, edited by Scott Herring. Since its publication, Prevention has been taken up across disciplines in order to investigate the multiple, sometimes competing, discursive regimes within which HIV prevention media operate. With what reviewers have called “deft analytical writing” and “deep, insightful close readings,” Dr. Cynn analyzes the ways the HIV prevention messages work to bolster normative conceptions of family within the context of neoliberal globalization and nation-building projects. Dr. Cynn’s research on this book was supported by a Fulbright Teaching and Research Fellowship in Abidjan, a Mellon Fellowship at Barnard College, and the inaugural VCU HRC Residential Fellowship.

The issues that lie at the heart of Dr. Cynn’s book, as well as her broader scholarly agenda, are animated by her own experience as an HIV/AIDS community organizer, first in New York City, working with low income and homeless people living with HIV and AIDS, and then in Abidjan, Côte D’Ivoire. As she writes in the intro to her book, the questions that guide her inquiry were first posed to her by the women living with HIV she encountered while living in Abidjan as a Fulbright researcher and Professor at the national university.

Dr. Cynn’s second book is a collection entitled Literary and Visual Representations of HIV/AIDS: Forty Years Later, co-edited with Aimee Pozorski and Jennifer LaVoie. In the words of Hiram Perez, Director of Women’s Studies at Vassar College: “Here cultural critique supplements the best kind of close reading, at once imaginative and historically accountable, laying bare the neo-liberalization of social policy as well the enduring rhetoric of blame/responsibility in all its stigmatizing force.” The recipient of both the CHS Seed award and an HRC research grant, Dr. Cynn is at work on her next book project, entitled “A Witness of My Time”: Visual Arts, AIDS, and the Archive. In this book, Dr. Cynn will turn her attention to visual art in the US in the 1980s and 1990s, as well as to the production of the archive of HIV/AIDS itself, interrogating the social and political work that collecting, recording, and preserving the visual art does in narrating a particular story of HIV/AIDS.

In addition to her writing, Dr. Cynn is also a filmmaker who has produced award-winning films, including co-producing Pote Mak Sonje: The Raboteau Trial, a film about the participation of women victims and activists in a landmark trial of former military and paramilitary members for a massacre in Raboteau, Haiti, which screened at over 40 national and international film festivals. Dr. Cynn’s film and video work extend her scholarship, reaching new audiences and enabling robust and reciprocal community partnership.

As a teacher, Dr. Cynn offers her students transformative experiences, the opportunity to challenge their commonly-held assumptions about the world, and think critically about the arrangements of power that have produced and maintain the status quo - as well as the space and tools to imagine new, more just, ways of being in the world. Dr. Cynn has re-imagined a number of classes core to GSWS major as well as key cross-listed courses, including Illness Narratives, cross-listed with both English and Science, Technology, and Society and Narratives of Asian American Sexuality, cross-listed with English. She also regularly teaches in the GSWS post-baccalaureate certificate program and has re-imagined the Gender and Cultural Production graduate course to focus on visual cultural productions that contest and reshape understandings of HIV/AIDS, appealing to graduate students across the university, from MATX Ph.D. students to Art History, to Health Psychology, to Sociology. Her classes are rigorous but generous - as is she herself, in fact: a careful, nuanced thinker of unfailing kindness and generosity.

Alongside her scholarship and teaching, Dr. Cynn brings the same careful, thoughtful attention to her service to the field and the university, recognizing that, as a feminist educator working for social justice, her service contributions can be key mechanisms to ensure greater access for historically marginalized students, staff, and faculty. In this effort, Dr. Cynn has taken on yeoman's work, both within the department, where she has shepherded through key governance, curricular, and programmatic transformations, as well as at the college and university level. Some key contributions include: serving on the LGBTQ Studies “big idea” search that brought our new colleagues Dr. madison moore, Dr. Christopher Ewing, and Dr. Ying-Chao Kao, as well as the development of the LGBTQ Studies minor, her long-term role on the CHS Faculty Council, and the development of numerous timely and critical events, including an event on Anti-Asian Violence, co-facilitated with Dr. Jennifer Rhee in March 2021.

Dr. Cynn brings to all her work an uncommon level of care--not only for the issues and ideas at the heart of her work, but also for the people that animate them, and for her students and colleagues. Thank you, Dr. Cynn, for your extraordinary work!