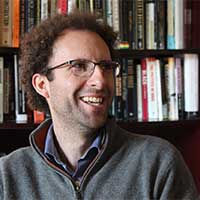 Adam Ewing’s work explores the dynamics of Black liberation politics in the 20th century. He is interested in the global perspectives and global networks developed by Black activists, and the ways in which those perspectives and networks inspire and create opportunities for local and community-based organizing work. His first book, "The Age of Garvey: How a Jamaican Activist Created a Mass Movement and Changed Global Black Politics" (Princeton University Press, 2014), explores the ways in which Black communities in Africa and the United States were mobilized in by the post-World War I era by the anti-colonial movement spearheaded by Jamaican activist Marcus Garvey. His edited collection (with Ronald J. Stephens), "Global Garveyism" (University Press of Florida, 2019), explores the dynamics of Garvey’s movement across locales ranging from Australia to South Africa to Liberia to Trinidad to Cuba to the United States Midwest. This work has established Dr. Ewing as one of the world’s leading scholars of the Garvey movement. "The Age of Garvey" was awarded the 2015 Stuart L. Bernath Book Prize by the Society for Historians of American Foreign Relations.

Adam's new book project explores the broader pan-African tradition out of which Garveyism emerged. In the 20th century, spurred in large part by Garveyism, this tradition evolved into a revolutionary movement that played out over several decades. Pan-Africanism is typically portrayed in histories of the 20th century as an elite-driven, intellectual project that was overshadowed by the mass mobilizations of the civil rights struggle in the United States and the independence struggles in Africa and the Caribbean. Dr. Ewing’s project demonstrates that the pan-African movement had its own popular tradition—one stretching back to the inauguration of the Atlantic slave trade—that was crucial in propelling the Black liberation struggle. This was a popular politics rooted not only in cooperation—between Black people, Black organizations and Black nations—but more crucially in the effort to refuse the Eurocentric project of universalism and globalization and to build a new order grounded in the principles of anti-racism, cultural self-determination and economic equality. This revolutionary thrust was propelled by communities stretching throughout the African diaspora: by African, West Indian, and Black American migrants; by revivalists from the Congo, Jamaica, and Detroit; by urban rebels in U.S. cities, asafo groups in the colonial Gold Coast (Ghana) and booksellers in London. The defeat of this movement in the 1960s and 1970s and the revival of global White supremacy left the Black liberation struggle unfinished. It provides the backdrop and the explanation for the emergence of the Black Lives Matter movement and the resurgence of White nationalism in our own time.