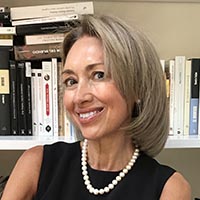 This is how leading scholars of Renaissance and Early Modern Spanish literature describe the work of Dr. Mar Góngora Davis. With four books published with prestigious presses and a fifth in the works, more than thirty articles in highly-regarded journals, Dr. Góngora Davis has contributed substantially to the fields of Iberian literary and cultural studies, gender studies, and religious studies.

Her work has expanded our knowledge of and method for understanding the role of literature in the construction of gender, sexual, ethnic, racial, religious, and class identities, and their reflection of and influence on material conflicts over the organization of social, political, religious, and economic power.

About her scholarship, Dr. Darcy Reydel Donahue, Professor of Spanish and Portuguese and Women’s Studies Program at Miami University, Oxford, Ohio writes: “Her articles, as well as her books, seek to deconstruct the often arbitrary separations that traditional criticism has created between categories such as race, class, gender and sexuality.” In this regard, her work breaks new methodological ground, as she examines how these categories shape each other and the social relations they reflect and mediate. She has also helped to bring lesser-known writers to the fore and, in so doing, provided insights into the views of those whose works have been excluded from the canon of what is considered high Spanish literature. In 2018, Dr. Góngora Davis’s essay, “Sobre héroes y monstruos: la decoración escultórica del Castillo de Vélez Blanco y la literatura de su tiempo” (“On Heroes and Monsters: the sculptural decoration of the Castillo de Vélez Blanco and the literature of his time”) published in La Cronica, a journal of medieval Hispanic language, literature, and culture, was recognized by the Executive Committee of the MLA Forum, LLC Medieval Iberian, with the John K. Walsh Award for best article.

Dr. Góngora Davis represents the best of the tradition of the scholar-teacher. She brings to the classroom an intellectual rigor that is at once both demanding and generous. She has taught a rich array of courses based on her research, such as: “The Post-Francoist Spanish Novel,” “Spanish Women Writers,” “Jewish and Muslims in Spanish Literature,” and “Jews, Christians and Moors in Medieval Castile.” Her courses at VCU introduce students to her extensive knowledge of Spanish literature, culture, history, politics, economics, gender, ethnicity, race, and religion. Students gain knowledge of the complex of forces that have shaped and have been shaped by Spanish literary traditions and knowledge. In addition to her teaching, Dr. Góngora Davis takes the role of mentoring students very seriously. She is known for being accessible, welcoming, and doing all she can to help students achieve their academic and professional goals.

In addition to being an internationally recognized scholar and a highly regarded instructor, Dr. Góngora Davis is a wonderfully generous colleague. She mentors junior faculty, serves on the School’s personnel committee, and has served on search and promotion committees at the College and University level. She is committed to excellence in everything she does, not least in her commitment to supporting the success of the Spanish program, the international educational mission of the School of World Studies, and the College of Humanities and Sciences. Dr. Góngora Davis’s contributions to the humanities are remarkable. Her work shows us not only how to read literature but also how to interpret the complexities and possibilities of new ways of being human. In doing so, she illuminates why the humanities matter.

Thank you, Dr. Góngora Davis, for enriching our knowledge and for deepening our understanding of your field and the world!